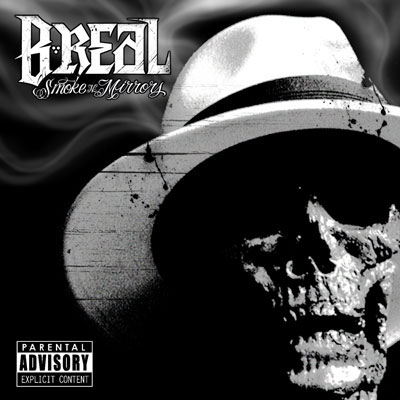 What does “Smoke N Mirrors” mean in the context of this CD? The original phrase references the optical illusion created by smoke and mirrors and used by magicians to fool their audiences. The implication in its use is that some sort of deception is involved. What the exact deception involved in B-Real’s case is hard to pin down. Is it in reference to the shadiness of the world where everything isn’t always as it appears? Maybe it is a reference to the fact that with no Cypress Hill album in over four years, it seemed like it was over for the â€˜Hill, but instead B-Real has resurrected their legacy? Perhaps it is the flipside of that coin, where the long awaited and momentous B-Real solo project is actually a death knell? After all, with so many records sold and so many crossover fans isn’t it a little odd to find B-Real signed to Duck Down? No offense to Dru Ha, but there wasn’t one major label willing to give an album deal to the front man of a band that has sold over 18 million records? We won’t really know what this record means in the long run any time soon. You could speculate what the absence of a single Muggs produced track could mean, but in the end you want a B-Real solo and not Cypress Hill light, right?

B-Real is B-Real, meaning that subject-wise this album mirrors his previous work with Cypress Hill. Matter of fact, the lead single “Fire” could really be considered “Ganja Bus II” as Damien Marley and B-Real hook up once again for a smoker’s anthem:

Despite sounding really familiar, I wouldn’t mind hearing a full album from these two guys. B-Real even produces the cut, showing he has more tricks up his sleeve than one would expect. B-Real flexes his producer’s muscle two more times on the album, including the hyphy inspired “Dr. Hyphenstein” where he is joined by Snoop Dogg. I have nothing against B-Real’s beats but it is the other producers that really make this album pop. Scoop Deville flips a sample something nasty for the title track, setting the mood nicely for the album. Bo Roc comes through with some real smooth vocals on the hook. Scoop also comes through with some hard hitting Cali G-Funk on the Xzibit assisted “Don’t You Dare Laugh.” Perhaps the most surprising production credit goes to Soopafly who comes through to show us he still has the funk on “Gangsta Music” while B-Real drops some knowledge:

“This one’s dedicated to the soldiers that made it through hell
Because a bullet never knows about the homies that fell
I’ve seen so many die right on the streets from products we sell
And when they smoke you all they leave behind is an empty shell
It ain’t worth it, but I had to work it no other choice
Until I heard the voice that told me go write songs with your voice
Because if you stay behind you might be taking a trip in a hearse
Because somebody’s thirst for blood might end up dropping you first
Because we play for keeps so what it means we’re playing to win
And if you ever been where I been then you never pretend
You got to B-real with it homie, no pun intended
And don’t kid yourself cause I don’t care if you get offended
If you affiliated or solo we all want the same thing
It would be amazing if we were all in the same gang
Might be persecuted at the time, we moving the chains
It’s a brain game, if we never try it’s a damn shame”

It is clear B-Real has matured over his years in the rap game and he does a nice job of putting together a mature album. “Psycho Realm Revolution” is a posse cut with a little of a socio-political twist to it. “Dude vs. Homie” is another dope cut where B-Real tells two sides of a story. B-Real isn’t all serious on here as the final cut shows. Too Short and Kurupt join him for the raunchy G-funk anthem “When We’re Fucking.”

B-Real hasn’t lost a step and can definitely hold down an album all by his lonely. The beats are a nice mix of G-Funk and soulful music. A little bit of the dark Muggs vibe would have been nice, but it seems B-Real wanted to express himself in a different way this time around. It’s a given that B-Real comes with the heat as he has one of the tightest flows and most unique voices in the game. So in the end what does “Smoke N Mirrors” really mean? Well, B-Real’s vision involved exposing the faÃ§ade that the rap game creates through lavish videos and exaggerated lifestyles by keeping it real. I’d like to think that in reality it’s a reference to the fact that just when you think the show is over, Cypress Hill manages to pull out one more trick from their sleeves to keep the audience captivated.