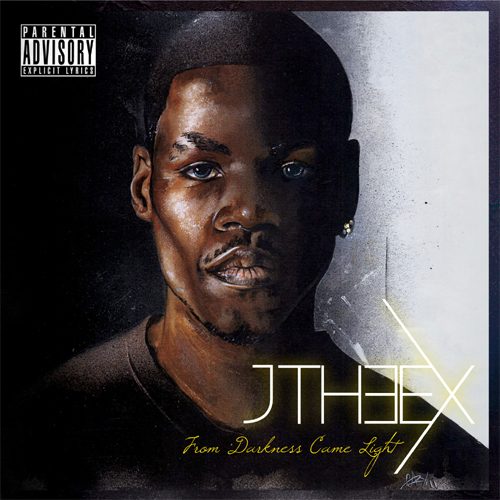 London based rapper J the Exodus, or as he often prefers to be called simply “J the Ex,” sent us his latest EP “From Darkness Came Light” for a review. The package itself was fairly barebones – just a shrinkwrapped CD in an unpadded envelope – no one sheet or bio. Given the cost of international postage I’m a little more forgiving than when a domestic rapper does the same thing, and J seems like a fairly technologically hip emcee anyway – it’s easy enough to find a bio on his personal website anyway. He’s been on the rise for a while now, having performed at the Queen’s Golden Jubilee all the way back in 2002. His first solo mixtape though was just two years ago, meaning he’s finally decided to strike out on his own and step into the spotlight.

While Exodus has the vocal tenor and accent typical to so many emcees who hail from the UK, his might be one of the mildest I’ve ever experienced, as but for a vowel sound here and there you could almost mistake him for a New York emcee (such as saying “kahn” instead of “can”). Though I’m often the one to advocate you shouldn’t avoid a rapper outside North America who has a strong regional dialect, in this case I don’t even need to advocate. Ex is a thoughtful and passionate emcee, and his message comes through loud and clear on songs like “Guiding Star” featuring Indigo & Tara Brown:

“Yo, I do this for my people so I play my position
I’m bringin you wisdom, openin our third eye vision
There’s no competition, illusion is distortin your vision
You’re hearin the mission, I’m strengthening your mind’s transmission
I’m the +One+ like KRS, but my name is J the Ex
I represent, more or less, that shitty city corner step
Where them young thuggees rest…”

For those who don’t know, the etymology of the word “thug” is actually traced to British India in the 19th century, so J’s usage here is not just lyrical but also educational in context. (A discussion of the true nature of the Thuggee criminal gangs would take far too long to do here – but the novel “Confessions of a Thug” would be a good place to start.) Production on the song is ably provided by Kwasi O, and although J uses a variety of different producers for his backdrops, that same level of quality remains consistent. “Blak Magick” by Teddy is almost gospel in its backdrop, and starts off fiery with J spitting “I represent my forefathers more harder than average emcees.” Nutty P laces “Knowledge Is Power” with a light and lifting funk and strong drums, and the song’s topic matter seems to represent J’s lyrical vibe on the whole.

By the album’s mellow closer “Always Be Me” (produced by Chemo) you’ve really caught J’s theme and vibe, particularly since he subtitles each song as to whether it represents his “dark” or his “light” side. It’s hard to deny the amount of thought and planning that went into the presentation and execution of this 40 minute album, which he modestly calls an “EP” but which to me is so much more than that. Though this is my first official exposure to J the Exodus, I’ll be keeping my eye on him for 2013 and beyond.