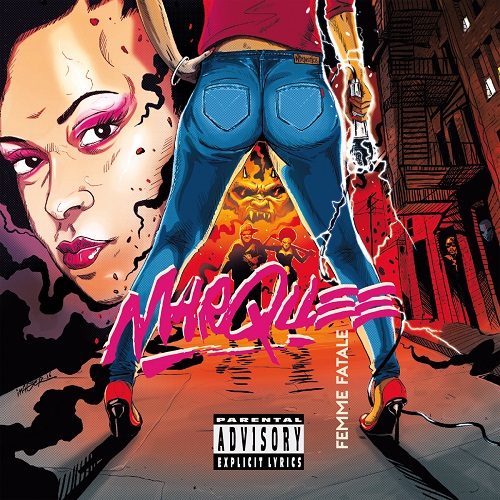 The 1990s were the most productive decade for female rappers in Northern America. From MC’s earning their just dues to those able to profit from others’ pioneering work while breaking new ground in other areas themselves, many female rap artists were successful with albums, from MC Lyte to Lauryn Hill, from Boss to Eve. Still there were a few who managed to make a name for themselves with singles and guest verses, in some cases signed deals and hit studios, but still never appeared in the album section of a record store with a full-length to their own name (not even with debuts who were as good as complete). Among the unlucky contestants were LeShaun (highest-profile appearance: L.L. Cool J’s “Mr. Smith”), Mother Superia (single “Roc Bottom”), Paula Perry (Masta Ace Inc.’s “SlaughtaHouse”), N-Tyce (single “Hush Hush Tip”), Sonja Blade (“Romeo Must Die” OST), Mama Mystique (single “Tremendous”), Free (Canibus’ “Can-I-Bus”), Charli Baltimore (Cam’ron’s “Confessions of Fire”), Medusa (Teena Marie’s “La Doña”), Lady Luck (Pharoahe Monch’s “Simon Says (Remix)”), Jane Doe (A Tribe Called Quest’s “The Love Movement”), Sah-B (Lords of the Underground’s “Here Come the Lords”), Uneek (“The Flip Squad Allstar DJ’s”), Ms. Kane (Twista’s “Adrenaline Rush”), Vita (“Irv Gotti Presents The Murderers”), Grip (Ice-T’s “Home Invasion”), or Shortie No Mass (De La Soul’s “Buhloone Mind State”).

Marquee took her name off that list in… 2017. Markita Ferguson made her way through the music industry mostly incognito. She got her start with Lord Finesse, who after initial contact at the beginning of the decade featured her several times on his 1995 album “The Awakening”. Her budding solo ambitions (which landed her – with a guest part for Jodeci member Mr. Dalvin – on the “Sprung” soundtrack, also starring Jay-Z and E-40) temporarily took a backseat when she was part of female trio/duo Femme Fatale (who for instance can be heard on a DJ Clue? mixtape cut alongside Nas, Noreaga, Nature and Mary J. Blige). At the time she had a deal with Track Masters Entertainment, which brought her together with further important players, including the Neptunes. According to the Discogs database, professionally she had her most prolific phase at the very end of the ’90s with appearances on albums by veteran MC’s Latifah and Lyte, R&B features with Monifah and Kelis, and if the Clipse would have put out their shelved debut, she would have been on “Exclusive Audio Footage”.

Many years later Ferguson finally found her album fortune in France with Shinigamie Records and producers Venom and Kyo Itachi. “Femme Fatale” is a bold attempt to bring the Marquee career full circle. With no one else around to tell her story, she defines herself on her own terms, identifying the DNA of this Femme Fatale in “a discography page”. She makes her entrance lyrically effectively in “five-inch stilettos” that “click-clack over a boom bap track”. In reality “Femme Fatale (Narrative Poetry)” is told to subdued speakeasy swing, but the following “Another Level” moves with the same sense of space as an “Awakening” track, and Finesse himself shows up to support his former protégée with a personal drop (he also supplies her with a beat later on).

Intended or not, “Femme Fatale” is in many ways a time capsule, generating a number of later ’90s themes. “Rude Girlz” not only calls two additional women to the mic, the quotes cut in by Venom are also exclusively female (starting with Heather B requesting “less b***es and more women”). Grizzled vets Prince Po and Nature join Kita for the Queens-themed “Surviving in the Desert”. The Markita/Femme Fatale character that she likely conceived around that time (the temporary moniker La Fem Markita alludes to the 1997 feature film spin-off ‘La Femme Nikita’, her Kelis collabo was called “Mafia”, etc.), makes a number of appearances. Grand Puba and Kid Capri samples are virtual 1995 time tags, while a lengthy speech by Nicci Hoo recalls a time when hip-hop and comedy were best buddies. And the album contains, not necessarily to its advantage, a couple of club rap grooves that could be called jiggy if just they were more sophisticated.

But above all else Marquee flexes her lyricism. She puts down competition with strong language (“Porno-lookin’ heffas stay slave to your hormones”), and in turn elevates herself with metaphoric imagery (“Headed to another level, increasin’ exponential / Spots I’m takin’ several, above heights beyond celestial”). She examines the role of families and communities when people go down the wrong path in “The Making of a Hustler”. We’re not going to pretend that “A Gangsta’s Fairytale” and “Children’s Story” never existed, but the depth and wealth of references (Sleeping Beauty is on meds, Alice is a party girl) make “StoryCrook” a worthy entry in the ‘hood fairytale’ genre. Sample: “Humpty Dumpty hit the bottle, passed out, hit his head / Try to piece it back together, but he drinkin’ instead / (…) / The brother’s grim, he came straight out the pen / He angry at the world, still actin’ like he in”.

“Raise the Bar” is just one example for the lyrical ambition that guides Marquee’s pen:

“Chicks I crush with the diction, eyes fixed on the vixen
So hooked on the flow, you gon’ need a intervention
Acrobatic linguistics, verbal warfare relentless
Bars give ’em the business, pen game tremendous
Ain’t buyin’ Gucci bathrooms, toilets with gold faucets
More like investments, portfolios and corporate
Tune out the noise, gossip, ratchet garbage
Share feminine mystique with my BK correspondent
Y’all raps nonsense, no concept, no content
Love for the game; harlots do it for the profit
Pasties and topless, the jewels, fancy garments
Limelights, the sponsors; I do it for the projects
Predicate convicts, single mothers, no baby fathers
Young’uns on the come-up to gods droppin’ knowledge
MC’s, b-girls, DJ’s, graf artists
Embodiment of the street in a world that love (hip-hop)”

In regards to combining her own artistic aspirations with a care for the community, Marquee recalls some of the greatest MC’s. It is evident that a couplet such as “Keep flappin’ your gums, I rap for the slums / My lines be like potent smoke corrodin’ your lungs” doesn’t have the same originality and quality (although it surely hopes to), but perhaps she does have a point when on the same track, “One of a Kind”, she claims, “They don’t make me like me anymore”. Either way for her it goes hand in hand with the realization, “No one can be a better me than me”, which finally hints at the personal journey her album concludes.

The most overt reconciliation with her past is “Hood Good”, where she reunites with Monifah to reminisce on younger days and on that old saying that God helps those who help themselves. Yet she reserves the most personal moments for “Conclusion”, another spoken word piece, but this time not as Femme Fatale but as Markita Ferguson, whose love for rap music has helped her overcome many setbacks.

“Femme Fatale” is a strong statement from a woman who has seen it all and has made a few interesting observations that she’d like to share, something there should always be time for. The neighborhood always stands out in the background, and ever so often she focuses on the glimmer of hope, intent to “share the wealth, spread the love” on “Lean So Hard”, or cautioning, “It don’t end with a black president” on “The Elevation”, with its upbeat mood, by way of loosely plucked harp and bass strings, also one of the few beats not stuck in the ’90s. For the time being, Marquee presents herself as the MC that could have been. If she keeps doing what she loves, the next time around she can fully emerge as the artist she has become.