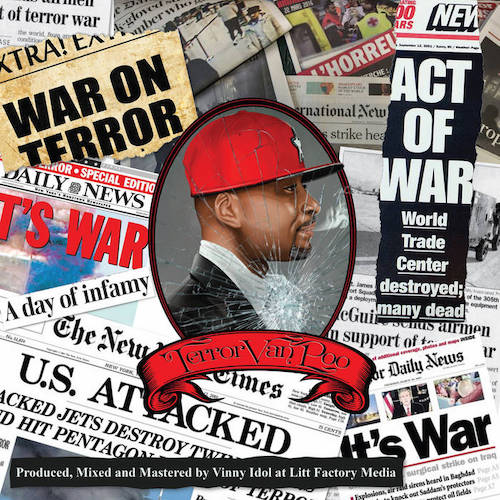 I’ll be honest, that name is why I checked this record out. Terror Van Poo may sound like a traumatic toilet incident, but “War on Terror” is in fact a tough street record built around dramatic production and countless shit-talking. Is it the shit though?

The Juggaknots’ Breeze Brewin, who just dropped the first dope project of 2021, pops by for “Think I’m Crazy” and bases his verse around faecal matter as some sort of Terror Van Poo homage. It’s an odd one, but again, infinitely more interesting than anything Van Poo is spitting. “Wack Rappers” is as derivative as the name suggests and that’s ultimately where Terror falters – there’s nothing new or unique to his approach.

I thought Planet Asia was tearing it up on “Suck Ya Mudda” but it’s actually an emcee by the name of Mad Macx. Dude sounds like a Gold Medallions doppelganger, and that’s not necessarily a bad thing considering he eats up the beat in a similar manner to the Cali Agent. “Smoke Your Life Away” and particularly “Fuck About You” are satisfying examples of Vinny Idol’s work. The latter in particular is menacing, benefiting from Lord Tariq’s weathered delivery – proper New York rap if you will.

“Wordplay2” possesses nothing of the sort and will only appease fans of fast, empty raps. AFRO, almost the spokesperson for this style at this point, sounds better at a slower pace but quickly descends into the usual “lyrical miracle” nonsense. If you’re into that, you’ll enjoy it, but older fans will have heard it all before.

“Why, Why, Why” and “Lunchtime” both benefit from DJ Jon Doe scratches, the former a competent duet with Queen Herawin, the latter equipped with scathing Big Pun snippets. And those nods to New York greats are clear inspirations, yet the hollow threats through the rhymes can feel tired and it’s stuff we’ve heard a thousand times before.

If you enjoy the New York mixtape vibe of Saigon, Uncle Murda or Papoose, without the lyrical depth those names provide, it’s a decent project if nothing more, worth checking for some solid craftmanship by Vinny Idol.