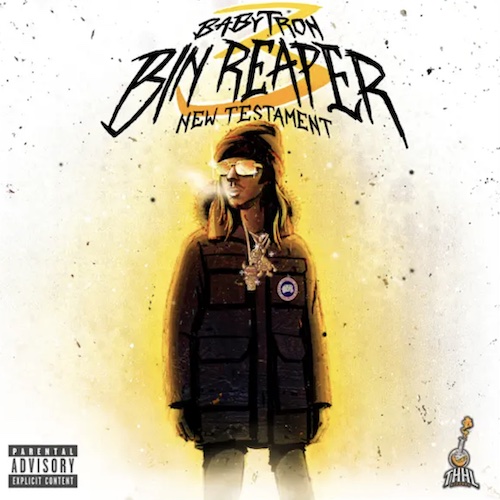 Last year I reviewed the questionably named ShittyBoyz after my interest was peaked by their passion for professional wrestling. Same bruh. It’s not a secret that I run a pro wrestling website and also write for one covering AEW. Just have similar interests isn’t enough to garner a favorable review though, and thankfully the ShittyBoyz were more than just a terrible name and a fun song about WWE. They managed to make enough of an impression with “Trifecta 2” that I started to look out for future projects from the group, which is how I came across the solo album from BabyTron titled “Bin Reaper 3: New Testament.” Unfortunately that means I missed out on “Bin Reaper” and/or “Bin Reaper 2” unless this is a Leonard Part 6 type situation.

The current single features fellow young rapper Cordae and a variety of different musical styles. Cordae sounds stressed out with lines like “When they see you doing well for yourself they love to hate you” but the track shows them having fun spitting. BabyTron’s style sounds like someone who grew up listening to equal amounts of Lil B, Drake and Migos. There’s a charm to the almost stilted way he raps. It feels like he writes bars without worrying about whether or not the beats will match up, then speeds up or slows down his delivery to make them fit in as necessary. This becomes even more apparent on a track like “Remote Control” where the song lives up to the name by feeling like the producer channel surfed his way through instrumentals.

There’s one thing I can’t be certain about with BabyTron though. From my first experience with the ShittyBoyz, I had the impression they were some Eastern Michigan friends who rapped for their own entertainment who accidentally found an audience for it. As such there are songs like “Zap Zone” (featuring someone named Certified Trapper) where he’s either spitting brag rap like he’s serious or just parodying the many people he’s heard doing it. Just because I enjoy it doesn’t make his intentions less confusing though, especially when paired with a music video where he certainly seems to be flashing cash, kicks and clothes like he’s serious about his swag.

As much as I appreciate the fact BabyTron is actually rapping, not singing or pitch modulating his lyrics, there are times where I do feel like he’s trying a bit too hard to get all his best snaps in. Maybe that’s the sin of being young in the game, where you feel like you need to constantly make everybody go “oooh damn” and hit rewind, instead of saving your one best snap for when it would make the most impact. I don’t hate a song like “Golden Child,” I just feel like he’s trying HARD.

“Tell a bitch my heart don’t work, pass a defibrillator
Whole team move the bag around, we facilitators
Shit, I’m chilly mode like I’m sitting in the refrigerator
You ain’t really plugged, you in the middle like an instigator
Shit, boy, you couldn’t copy this with a printer machine
Feelin’ like Houdini, make you poof when the trigger release”

See what I mean? It’s like a punchline every single line. Calm down a little BabyTron, we know you can rap, and a little humor can go a long way. Much like the ShittyBoyz album “Bin Reaper 3: New Testament” was more than I expected it to be, but nowhere near the full potential that it could be. I’m so used to short albums these days that I feel bad for dragging someone for going long, but 72 minutes of BabyTron’s non-stop bars feels like a bit much. At least as one third of a group he had his homeboys to balance him out, and he does have some guest stars on this project too, but if I can sum up all my points in one sentence it would be “less is more.” Keep doing what you’re doing though BabyTron and I’ll keep checking for you.