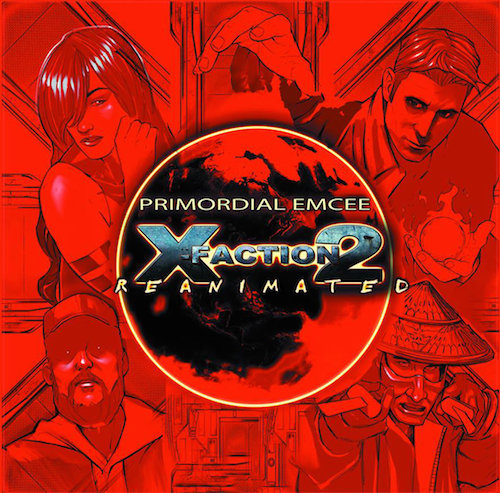 For real now this is my last Hand’Solo review for a while. After the superb but super long “Bassments of Badmen 3” I was almost completely burnt out, but undeterred by my whining their press department serviced me Primordial Emcee’s album TWICE. Now I’m going to be fair about it and note that they weren’t purposefully trying to commit overkill, it’s just that their first press kit contained a link to the album that had already expired without them knowing about it. Where I will bust balls though is the statement “Now how about that review?” in e-mail number two. Listen – it’s not automatic. My time is very limited these days and if I have to spend all of it covering just one label or artist I’m going on a sabbatical with no set date of return.

I briefly mentioned Primordial in my review of “Badmen 3” and by “briefly” I mean he snuck into the last sentence of my write-up — “…purposefully nerdy cuts like ‘The End Is Nigh’ by Primordial Emcee…” — and that’s it. That song is included here.

The “purposefully nerdy” part is continued throughout the rest of the album with a plethora of comic book samples and references, culminating in the accurately titled “Comic Relief” track. It reminds me of when The Last Emperor had his “Secret Wars” well after the 1984-85 Marvel crossover event but well before the 2015 mini-series. Both songs are equally insider and meant for the heads who do more than go to the movie theater every time an installment of the ongoing Marvel Cinematic Universe drops.

For a lesser rapper over lesser beats there would be a possibility of 50 minutes of this becoming tiresome. Thankfully Primordial Emcee gets by with a little help from his friends such as Wordburglar (“The Perfect cRhyme”) and royceBIRTH (“T-Dot Hip Hop”) breaking up his bars. That leaves the solo tracks like “The Path of Prime” all the more digestible, and Primordial takes advantage to get a little DIGITAL as he goes on a Neo/Matrix like adventure (both get directly referenced).

“Sit back, relax, insert this device
It’ll feel a little weird at first but it’s precise…
… Started tripping balls when the vortex spun
Got the signature on his cortex done
If you’re not one of us you’re one of them son
The path I walk and talk is an immense one
This isn’t the first Matrix to play tricks
The worst is yet to come, da-dum-da-dum-dum”

To be honest though one of the tracks I appreciate most is the laid back piano groove of the aptly named “Take a Day Off” featuring Chief 4syt & Alexa Ourania. On the whole though I dig Primordial’s Toronto by way of Penny Arcade Expo flows, and while he’s not going to turn the genre of nerdcore on its ear, he’d be welcomed by its most staunch advocates while still finding some open minded listeners who don’t get all the references but would still enjoy the beats and flow.