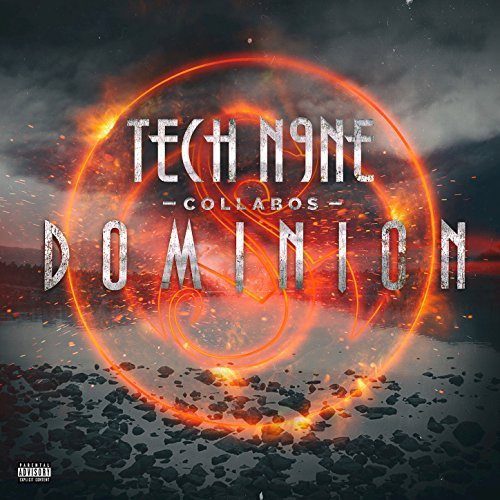 The seventh installment of the Tech N9ne “Collabos” series arrived on April 7th of this year and is known as “Dominion.” I feel the need to point out this out at the start because some might consider this to be a “Tech N9ne features all of his friends album” and not a “Tech N9ne album,” but in my experience the difference between the two is not huge (or HYOOOGE). Whether you get the regular or the deluxe version of “Dominion,” which is a three bonus track variant, there’s only one song on either one that doesn’t feature Tech and that’s “Take You Down.” The sound isn’t even that different as resident Strange Music producer Seven did the entire album save for “Jesus and a Pill,” which he co-produced with Joshua S. Barber. From my vantage point these are Tech N9ne songs on a Tech N9ne album, even if they might technically be “CES Cru featuring Tech N9ne” or “Darrein Safron featuring Tech N9ne.” You call it how you want to call it. On a non-Collabos album all of these same artists would be working with Tech and making cameos as guests on his songs. I’m willing to concede they’re not the same technically but I firmly believe it’s not something the average listener or fan would be all that concerned about. A Tech N9ne album is a Tech N9ne album and a rose by any other name is still a rose.

Incidentally that’s a good thing because Tech N9ne albums are consistently solid from start to finish and feature a lot of tracks that sound good thumping out the speakers in your ride. Even though Mr. Aaron Yates is now at a point in his career where some artists might be having a mid-life crisis, Tecca Nina seems completely oblivious to his age and continues to drop one album afer another and do one tour after another. His only fair rival in consistently delivering to his fans is E-40 and they have something else in common — an incredibly strong regional following. Earl holds it down for the West generally, the Bay Area locally, and Vallejo specifically. Aaron holds it down for the Midwest generally, Kansas City locally, and Lee’s Summit specifically. It’s the middle of the three people tend to think about them repping which is all to the good, but what has served each well is the ability to export this local flavor to a national market and earn more converts in the process. Slowly building up a loyal cult following over a long time has kept each a successful self-made artist.

Tech: “They see me with women that’s glamorous
People think I’m polyamorous, when I go hippity-hop I hammer chicks
Never blowin bunk and bammer sticks
Muffed the milli and mind your manners, miss
Blood I get to blastin that blammer b—h
Action always accompanies an anarchist
Suckers slip up and stammer s–t
But I like livin life lovely and lantern lit
Muh’f–ker (cheah!) I am the Tech, I’m buyin the jet
Lot of people are freakin out with maybe flyin the vet
Eyein the check, no denyin bitches cryin for sex
Spyin, dyin or wet, wanna put the N9ne in your neck
They really wanna deep-throat it cause everything he quoted
was devoted to makin them miss it and decode it
Incredible f–kin piece of what the C’s and B’s voted
The T’s roguish and sees solace when reloaded!”

“Reloaded” brings me back to the point of this being a Tech N9ne album by any other name. Darrein Safron and Godemis (of CES Cru) are just fine on the song, they do nothing wrong, but once Tech N9ne starts spitting out bars in his often imitated and rarely duplicated rapid fire delivery at the end of this verse, you’re reminded exactly who the star is. It’s not that Nina is setting out to show other people up it just HAPPENS. It takes an exceptional talent to hang with Tech on a track and not get overshadowed, and to the surprise of no one that turns out to be Murs and Rittz on the aptly named “Mo’ Ammo.”

Murs: “I’m in my Bass Pro camo, lookin like I’m Rambo
Military sack strapped with some roman candles
I’m ’bout to light it up, like it’s Independence Day
I do it underground, that’s the independent way
I got a dinner date, I’m ten minutes late
With this chick that I met up on the internay (huh?)
I mean the internet, I mean that f–kin app

I mean a meth head, I met her in the f–kin trap (huh?)
No, what the f–k is that? I met her at a show (ohh)
I’m like Jeezy sellin tickets like it’s f–kin snow
Or like I’m Yeezy sellin Yeezys, I’ll be goddamned
You gotta buy these V.I.P. tickets, understand?
I mean a stream is just a dream unless you’re front row
A million views, we lookin good, but no dough
I’m in the booth whippin merch like I’m in the kitchen
Strange Music goin stupid, it’s your new addiction”

Similar examples include Brotha Lynch Hung and Murs rapping on “Bacon,” Wrekonize and Krizz Kaliko on the mellow “Morning Till the Nightfall,” and Prozak joining Tech and Kaliko for the aforementioned “Jesus and a Pill.” The latter is a bit of a weird song musically – it takes about 72 seconds to get loud and when it finally does it’s more hard rock than hip-hop. This isn’t a BAD thing, it’s just not as “bump this in your whip” as most of the other tracks. Tech’s willingness to experiment and embrace metallic sounds and styles is part of what keeps him strong though. Even when he works with the same people, the songs don’t necessarily sound the same from one album to the next, and the variety keeps each “Collabo” intriguing.

The last Tech album I reviewed was “Special Effects” and if I’m being honest this one isn’t quite as banging but we’re taking small degrees of difference and not oceans of distance. You certainly wouldn’t be disappointed in “Dominion” if you’re a long time Tech N9ne fan, and if you’re a newcomer songs like the funky and funny “Fish in a Pita” will probably make you a convert. Jump in on this latest “Collabos” installment either way.